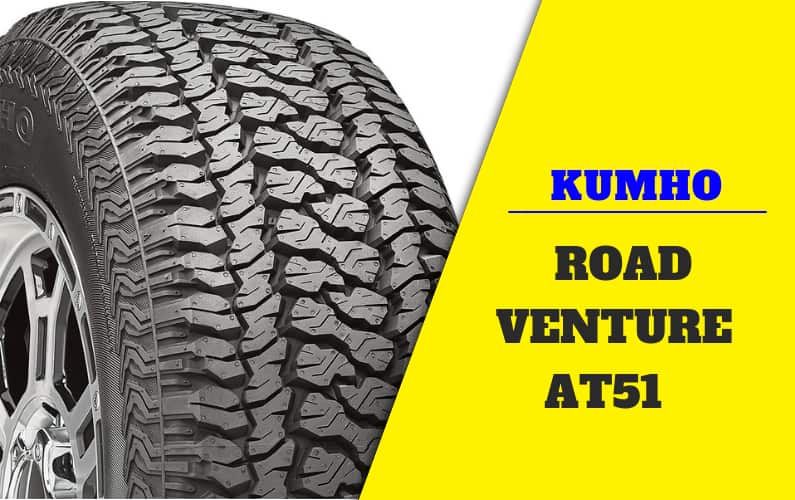 The Kumho Road Venture AT51 was first launched in June 2015 with the goal of replacing the existing AT KL78 all-terrain model. The Venture AT51 improves on the older model in a number of ways including increased traction, especially in the snow, along with better ride comfort and longer, more even wearing tread life. The tire is built for light duty pickups, jeep’s and SUV’s.

There is a lot to like about the Road Venture AT51. Kumho has put some serious time and effort into improving this tire. So much so that it sizes up well with some of the class’s top performers.

The tire has superb traction regardless of conditions. Rain, snow and ice are no match for the Road Venture AT51 and the tire sits in the upper echelon of this category. This excellent traction is extended to all types of terrain. The tire puts in a good shift when put through its paces on the highway where it again is a solid performer. A major draw card for the Kumho Road Venture AT51 is its price, which is below its competitors despite the similar performance

There isn’t much to not like about this tire. The only real sticking points one may have is that the ride comfort isn’t amazing – although this is a tire built to take on all challenges. When the mud gets really deep the tire does struggle a bit, but you would have been in serious trouble for thick stuff for it to be found wanting.

Overall, this tire is in the top half of its category. It is a great option for the weekend warrior that loves the outdoors or for anyone having to negotiate gravel roads and less than ideal job sites.

Vehicles that can use Kumho Road Venture AT51

The tire is designed for light duty pickups, jeep’s and SUV’s. Below is a list of some of the popular vehicle choices for the Kumho Road Venture AT51 Tire:

The Kumho Road Venture AT51 starts at approximately $109 for a base model. Occasionally you may also find discount offers, coupons and special prices on the tire which is retailer dependent.

Kumho provides a 6-year or 55,000 mile tread warranty on P-Metric and Euro metric sizes only. The uniformity of the tire is guaranteed for the first year or first 2/32 inch of tread wear.

There is a 6 year materials and workmanship warranty which includes free replacement for the first 2/32 inch of wear. There is also a prorated amount given for the remaining time period or when the tires wear down to the final 2/32 inch of the tread depth.

Craig says: “I’ve run these tires on my jeep for the past two years and must say I am impressed. Snow traction is amazing, as is the off road traction. There hasn’t been much where but the Jeep is not a heavy vehicle. I have tried to find a “better” tire but couldn’t for the same price. I’ve just put a set on my Nissan Frontier SV and feel I can go anywhere without having to worry. Excellent tire!”

Rob says: “I am nothing but impressed with these tires. They have sure footing and excellent traction in all conditions. The rating section does NOT include ICE. I bought these because last winter, I got involved in a 6 car pile up in icy road conditions. I can honestly say if I had these Kumhos on my truck, I would have been able to avoid that accident! At this price point with a rebate to boot, a real bargain and one I would happily suggest.”

Get Exclusive Deals & Coupons on our Top Selling Tires