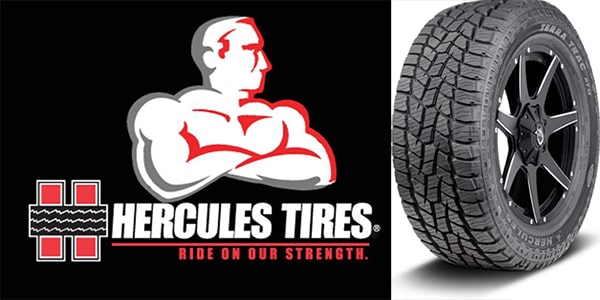 The Hercules Terra Trac AT2 has managed to perform brilliantly on and off road, while keeping the price budget friendly for drivers. Built for drivers of 4X4s, SUVs, light trucks and jeep vehicles, these tires provide an array of features that are designed to deliver year round performance on various road surfaces.

Hercules has manufactured these tires with an exclusive AT-C tread compound which is infused with silica and engineered to increase all road and all weather traction and provide an overall better treadwear. The added silica and lateral grooves content help enhance wet road traction as well as grip on snow and ice.

These grooves are far more dense in comparison to the original A/T tires. The optimized tread pitch sequence lowers road noise substantially and the unique tread profile provides great stability and steering response at higher speeds on the roads.

Hercules sports an aggressive buttress design that produces alternating scallops on the shoulders of the tread for enhanced traction on dirt, sand, gravel and rock as well. Stone ejector ribs, tapered steps and uniquely placed grooves in the groove walls combine to provide reduced stone retention and improved performance in tough conditions.

Hercules has produced excellent tires with the AT2’s, performing well in many categories and priced lower than competitors in the tire market.

Vehicles That Can Use Hercules Terra Trac AT2

The Hercules Terra Trac AT2’s are designed for SUV’s, light trucks, jeeps and other 4X4’s and sport a variety of excellent features for drivers seeking performance for their vehicles.

The Hercules Terra Trac AT II prices range from approximately $124 and upwards. You may also find occasional discount prices, coupons, rebates and special offers on this tire.

Hercules provides a 60,000 mile tread warranty on the Terra Trac AT 2. There is a first 1/32 inch of wear guarantee on tire uniformity. Materials and workmanship are warranted for 6-years.

No matter how durable and super quality your tires are, we recommend to learn some new skills to do very basic work yourself. So, feel free to check out our guide about tire repairing.

Maurya says: “We have used these tires before and really like the way they handle all weather and the tread lasts. We had our other tires for about 6 years and they did great. Both of our vehicles have this brand.”

Katie says: “These are good tires- I had a set of them that wore irregularly due to an alignment issue on my vehicle, but purchased the same tires to replace them once the vehicle was aligned. I drive on a lot of dirt/rough roads and these tires seem to hold up well. I leave them on my vehicle year round- they’re decent for mud/snow.”