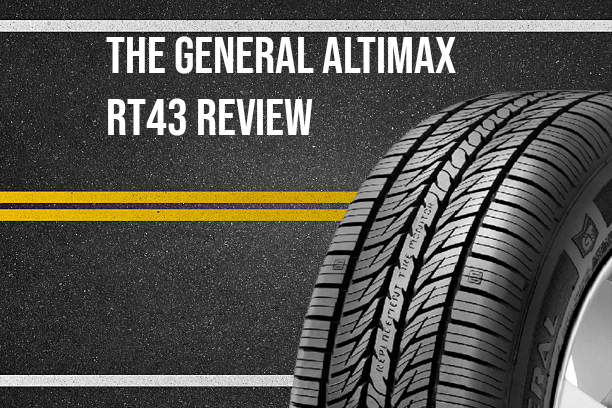 The General Altimax RT43 was released in July 2013 and was designed to replace the original Altimax RT tire. They have done a brilliant job on the upgrade and this is evident in the tires performance.

The new instalment is built to deliver increased all season traction and handling. These tires perform greatly with enhanced ride comfortability and extended tread life and they are designed for drivers of sedans, minivans, coupes and crossovers.

On the inside of the tires tread, there are two steel belts with a polyester cord body casing which allow for added strength and long term durability. The tread life is also among the longest of any tire in this category which speaks volumes for its durability.

Overall, the tire stability is exceptional throughout the speed range and the ride quality is excellent on all road surfaces.

Vehicles That Can Use General Altimax RT43

This tire is designed to deliver enhanced all season traction and stability for drivers of sedans, minivans, crossovers and coupes.

Learn more how to check size of a tire.

The General Altimax RT43 prices range from approximately $56 and upwards. You may also find occasional discount prices, coupons, rebates and special offers on this tire.

General Tire warrants the RT43 for 6-years or 75,000 miles. Mileage for rear tires is reduced by half if sized differently than the fronts. Tire uniformity is guaranteed for the first year or first 2/32 inch of wear.

James says: “I am not employed by General Tire Co. and I am not being paid for this review. I Got these tires for a fraction of what other, more expensive brands cost. These tires are very quiet and have a very attractive footprint. The ride is very smooth compared to the OEM tires. Overall, I am very satisfied and confident in these tires. I will definitely be purchasing General tires in the future.”

DJ Brown says: “Bought a set for my 2017 Ford Escape. I live in Michigan, they worked great in all weather including snow. I liked them so much that when my daughter bought a 2018 Ford Escape a few months later, I bought her a set too. She lives in Kentucky, more rain and less snow there but she loves them and I know she is riding on great tires. With us living in two different states, I ordered them and had them shipped to a installer that was just 3 miles down the street. The whole process worked great. This is the third time I have bought tires and each time I have been very happy with the product and service.”