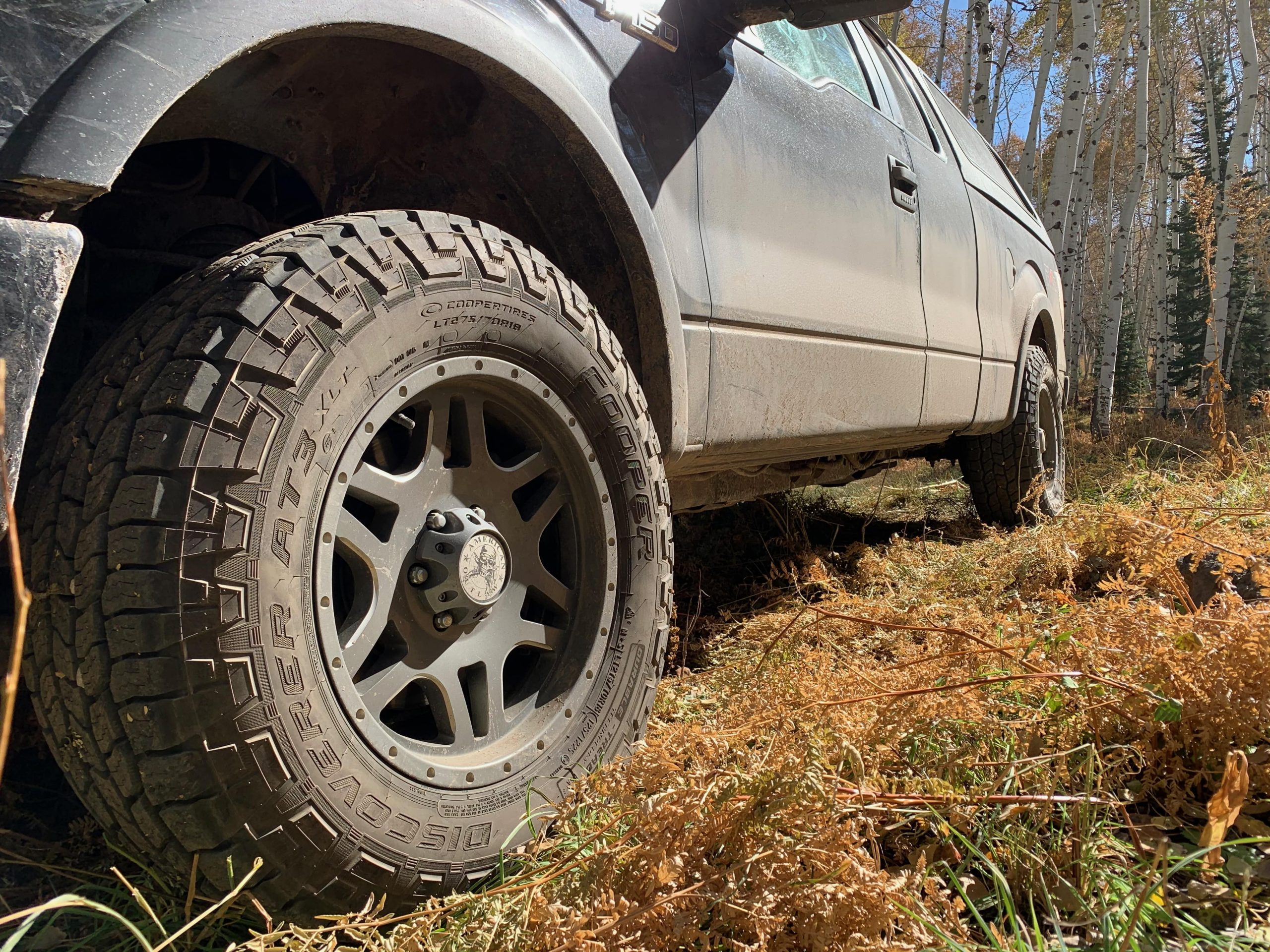 Many tires have been based off the Cooper Discoverer AT3 and it’s easy to see why. This tire designed for SUVs, pickups and other 4x4s focuses on performance in a broad spectrum of environments. If you enjoy taking your vehicle through its paces on a variety of surfaces, the Discoverer AT3 may be the tire for you but feel free to check our Review of Cooper Adventurer H/T as well as the Review of Cooper CS3 Touring.

This is a highly rated tire and performs well over several different categories.

The tire delivers rugged off-road performance and you can be rest assured you or your vehicle won’t be let down when taking on mud, gravel, sand, grass or rock. This is due to A divided center rib, Aggressive shoulders, and chip resistant tread compound.

This is a particularly grippy tire and has excellent traction on dry and wet roads. The wet road performance is probably most impressive thanks to the sophisticated silica-based tread compound which provides the driver with confidence and stability. It is also Interesting to note that the lateral protection the grooves provide act as a self-cleaning mechanism to reduce stone retention on the surface.

We suggest that you read our Duck Mud Tire Commander Review or maybe even Tires Duck Commander to expand your knowledge regarding tires.

Although not as bad as many of its rivals, the Discoverer AT3 tends to struggle when posed with the challenge of heavy rock formations and deep, winter snow. Again, these are not massive detractors but should be mentioned.

Overall, the Cooper Discoverer AT3 is a superb, adaptable all terrain tire that ranks in among the top contenders in its class.

Vehicles that can use Cooper Discoverer AT3

The tire is designed for SUVs, pickups and other 4x4s. Below is a list of some of the popular vehicle choices for the Cooper Discoverer AT3:

Note – This is not a full list of vehicles which are compatible with the Cooper Discoverer AT3 and if your vehicle is not listed above check out our Discoverer HTP Cooper Review and Discoverer STT Pro Cooper Reviews to find the tire for you.

The Cooper Discoverer AT3 is available in several different sizes and specs:

The Cooper Discoverer AT3 starts at approximately $114 for a base model which is an incredibly reasonable price for decent performance. Occasionally you may also find discount offers, coupons and special prices on the tire which is retailer dependent.

Find out other price range for other types of tire by looking into the Evolution H/T Cooper Review and also GLS Touring Cooper Review.

The Cooper Discoverer AT3 has a tread life warranty of 50,000 miles. The uniformity of the tire is guaranteed for the first year or first 2/32 inch of tread wear. There is a 5 year materials and workmanship warranty which includes free replacement for the first 2/32 inch of wear. There is also a prorated amount given for the remaining time period or when the tires wear down to the final 2/32 inch of the tread depth. Click here to read all our Cooper Tire Reviews.

Jarryd says: “This is my first set of Cooper AT3s and I can say unequivocally, they are the best tires I have ever owned. They have given me more miles than any other 10 ply rated tire. I am getting ready to replace them with the same tire and couldn’t recommend them more.”

Gavin says: “I have had good traction in heat, cold and rain. Cornering with these tires is something I look forward to and they are grippy around winding roads. No problems and the tread is holding up well after 15,000 miles. Would buy again.”